My brethren, count it all joy when you fall into various trials, knowing that the testing of your faith produces patience. James 1:2

We are called to count it all joy in the midst of our troubles. Sure, easier said than done, isn’t it?

Paul was a front-line worker for Christ. Now I ask you a question: What is it that can cause a mere human being like Paul to be willing to endure all of these hardships and still keep believing what He claimed to believe? He was human just like you and me. He could’ve easily said “Flag this, why should I have to go through all of this? Paul could’ve said, “Jesus promised that he would give me whatever I ask the Father in his name. But that doesn’t seem to be working! Psalm 91 says A thousand will fall to my left, 10,000 to my right but no harm will come near me, but that doesn’t seem to be working! Or if he was worldly-minded, he could’ve said to those people he was ministering to, “I am showing you the way to eternal life. If you want to mock me, go ahead and die and go to the other place, ….I will go run my tent building business, make some money, live comfortably, and even help those in need. After all, God wants to bless me and prosper me. Who needs all of this? Beatings, stoning, bleeding, prison….Surely life can be better than this because I belong to Christ. Right?

But no, Paul willingly chose to endure all of that and did count it all joy for the sake of Christ. He and Silas were singing while in prison. Remember, Paul said “Rejoice in the Lord always” to the Philippians. He said that when he was in prison in the most uncomfortable situation one could ever comprehend. In Acts 5, the apostles were flogged in public, and instead of being angry at their oppressors, they felt proud because they were considered worthy of suffering for Christ. That’s weird, isn’t it? Peter the apostle was crucified upside down because he didn’t think he was worthy enough to be crucified just like Christ. I read somewhere that back in those days, the Romans used Christians as torch lights to light up their streets, by setting them ablaze. How horrific!! And yet they couldn’t and wouldn’t denounce their faith in what they knew was true. Did they count it all joy? Perhaps they did, considering what the future held for them. They seemed to have received a gospel message that somehow penetrated so deep and was so precious to them. So much so that they were unwilling to let it go even to the point of death, let alone moments of hardship, sicknesses, or lack. What is it that causes a human being to boldly endure that much pain and yet not renounce their faith? Why was their belief so important to them?

Can You count it all joy?

Are we today hearing the same gospel as they heard then?

In Asia, we see glimpses of such stories even today 2000 years later. I work with ministry partners in Asia and I’ve seen and heard front-line workers getting beaten, churches being burnt down, pastors and their families being mocked on the streets, some hospitalized and some even killed. Just a few weeks ago in India, a frontline worker, one of our trained pastors was beaten up by a mob of 60 religious fanatics, paraded in public in mockery, left bleeding, and hospitalized. His wife was mocked and abused. Justice was denied by the officials. A few months ago, in another part of India, one of our pastors was killed leaving behind an unemployed poor wife and 2 little children. Once again, justice was denied. One of our pastors got thrown into prison without a trial in Nepal. He is today in prison but runs a bible study inside the prison. In the Philippines, ex-Muslims live in fear of publicly confessing their faith (like Nicodemus) because they could get ostracized or killed. They call it an honor killing. Likewise in Pakistan too, no one would register a case against them. I could tell you more stories.

But when you watch these people, their stories somehow seem to fit in well with the trend you see in the bible. I could tear a chapter out of their life story and insert it into the bible and it would probably look like it belonged there. That tells me that their faith is in line with the faith of Paul, Peter, Silas, and others in the bible. That assures me that the gospel they heard is the same as that Paul preached. Obviously, it doesn’t mean that all of us have to go looking for trouble just to prove our faith. That would be foolish, but it certainly makes me examine myself and question myself. If I were in that situation, what would I do? Would I be able to count it all joy? What would you do? Would you endure and still pray for them? These are real stories of Bible League’s frontline workers in many developing countries. These brothers and sisters in the Lord know this very well and expect this before stepping out to be a witness for Christ. Now, who in their right mind would do that?

This is so different from the Christianity portrayed in much of the world today. You see more of glamour in Christianity today as opposed to Christians carrying their cross daily and walking with the power of the Holy Spirit in them. It is so inspiring and encouraging to see that genuine faith still exists and genuine disciples of Christ still exist, and their lives are very much similar to the ones you see in the bible. They lead simple lives, they are loving people, very generous, selfless, and share the love of Christ at every opportunity. Yes, they face persecution just like in the days of old. Sometimes they even get killed, and yet they still love the Lord immensely. But more than that, their faith is confirmed by signs, wonders, and miracles daily. They count it all joy for the sake of Christ.

I submit to you; that such faith has got to do with how you see Jesus Christ!! Do you see Him as Lord and Savior or “USEFUL” to you? Come to Jesus, He will heal you, He will prosper you, He will give you peace, He will restore your relationships, He will bless your finances, and He will take all your problems away…. OR I am utterly sinful, my thoughts and my actions are sinful, and I am separated from God for eternity. I see Jesus as my Savior who rescued me from my helplessness and sin and reconciled me to my Father. Now I belong to Him, and I have eternity to look forward to with hope and joy because of Christ. He is truly the Lord of my life and I need to tell the whole world about Him. How do you see Jesus Christ? Savior or Useful?

The gospel message is not about just escaping hell and going to heaven. It is about the love of the Lord for us sinful men. It is about His eagerness to be intimate with us, walk with us daily, and be a Father to us. It is about His longing for us to love Him just as He loves us. It is about being set free from the power of sin that separated us from Him and the ability to be Holy as He is Holy. That is what the believers in the bible understood as the gospel message. They received Him and not just the message. And they were unwilling to break that intimate relationship with Him, even to the point of death.

Intimately knowing Him causes us to walk with immense gratitude and humility despite happy times or sad times. It causes us to rely completely and wholly on Him alone for eternity. He becomes our primary desire and everything else in life takes a back seat. Then just as He said, “these signs shall follow those who believe….” and it does too.

I want to encourage you to get to KNOW Him and spend time alone with Him and His word as often as you can. Please…. because once you do, He will be all that you need. He is so loving, He is caring, He is compassionate, He is powerful, He is mighty, He is forgiving, He is Lord, He is God!! Perpetually walking in worldly uncertainty, yet full of peace knowing all will be well, that is the secret of walking with Jesus.

In conclusion, I am truly grateful for His grace and mercy over my life. I choose to count it all joy for the sake of my Lord and Savior Jesus Christ.

Christian Gifts from the Holy Land 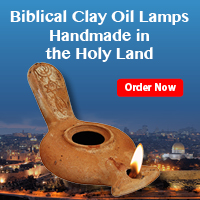 Please bear in mind that we may receive commissions when you click our links and make any purchases. However, this does not impact the content on this website in any way. We revere the Word of God and do our very best to adhere to its authenticity.